EAST Japan Railway (JR East) unveiled its Alfa-X Shinkansen test train at the railway’s maintenance centre in Rifu, Miyagi prefecture, on May 10, ahead of the start of testing the following day. 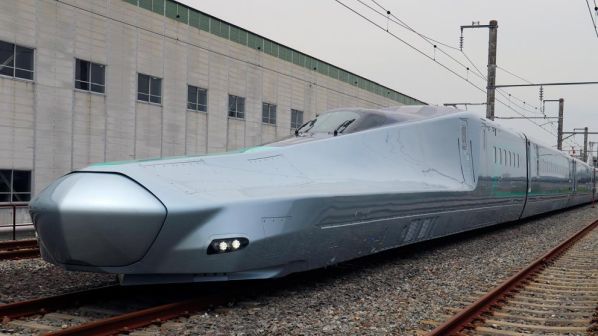 Tests of the 10-car Alfa-X will take place around two times per week between Sendai and Shin Aomori for the next three years.

The train features a 22m-long nose and is one of two types under development, with Type A featuring a 16m-long nose, 1m longer than the current E5 series Shinkansen train.

JR East is aiming to introduce a new train based on Alfa-X on the Tohoku and Hokkaido Shinkansen lines around 2030, when an extension of the Hokkaido line is scheduled to open. JR East hopes to operate the train at 360km/h, which would be the fastest train in service in Japan.

For a detailed technical overview of the Alfa-X train, see the December 2018 issue of IRJ p34, or click here.