TWO special trains were operated on December 8 and a ceremony was staged in Berlin attended by Germany’s chancellor, Mrs Angela Merkel, and federal transport minister Mr Christian Schmidt to mark the completion of the final section of the 623km Berlin - Erfurt - Nuremberg - Munich high-speed line. 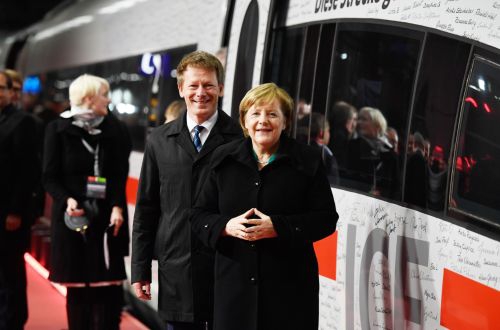 The €10bn federally-funded Berlin - Nuremberg scheme is also the largest of 17 German Unification Projects (VDE) launched in 1991 following the reunification of East and West Germany. The nine VDE rail projects accounted for more than half of the total €41bn VDE investment.

It has taken around 10 years to complete the Berlin - Nuremberg high-speed line which has involved a mixture of upgrading and new construction. Upgrading of the Berlin - Halle/Leipzig main line for 200km/h operation was completed in 2006, followed in December 2015 by the opening of a new 300km/h line from Halle and Leipzig to Erfurt. The final 300km/h new line from Erfurt south to Ebensfeld near Bamberg has now been completed.

The new line sections include 26 tunnels totalling 57km and 37 viaducts including the longest in Germany: the 8.6km viaduct in the Saale-Elster-Aue near Halle.

In addition, a new line was built from Nuremberg to Ingolstadt and the line from there to Munich upgraded, along with the Ebensfeld - Nuremberg section.

At the same, the timings of more than one-third of DB’s long-distance services will be altered in what DB describes as the biggest timetable change in its history, with 17 million passengers benefiting from new direct connections or shorter journey times.

“Today is an historic day: with this superlative railway,” says DB CEO Dr Richard Lutz. “Berlin and Munich will be connected in a record time of less than four hours, from city centre to city centre. With this offer we will inspire more people than ever before to take the train.”