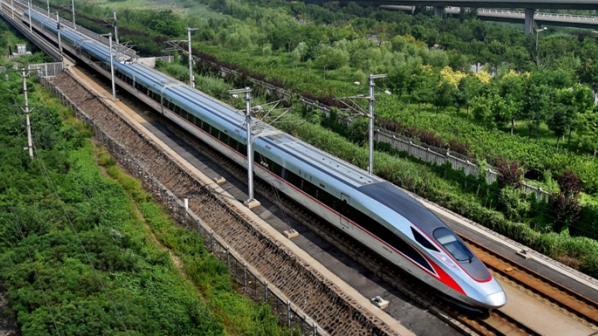 The 342km line will serve 12 stations, with a design speed of 350km/h and a capacity of 34 million passengers per direction, per year. The line will be equipped with a CTCS-3 train control system. The line will run mostly at-grade with a maximum gradient of 20‰, with an underground section in the Xiong’an New District.

Construction of the project will be carried out by the Xiongan High-speed Railway Company over four-and-a half years.

The project will be partially funded through a Yuan 12.25bn contribution from China Railways, with additional contributions from provincial and local governments, including Yuan 5.81bn from Shanxi province and Yuan 5.24bn from Hebei. The remaining capital is expected to be raised through loans from domestic banks.

Trial runs have begun on two new sections of China’s high-speed network between Xuzhou and Lianyungang, and Beijing and Chengde.

Trial operation on the 180km Xuzhou - Lianyungang ‘Xulian’ high-speed line in Jiangshu province began on January 8, ahead of the line’s scheduled opening in early February. With a design speed of 350km/h, the line is expected to shorten end-to-end journey times between the two cities from two hours to just one.

Construction of the Xulian line began in July 2017. When completed, the line will create a roughly 3500km continuous high-speed rail connection between Jiangshu province, and Urumqi, in the Xinjiang Uyghur Autonomous Region.

The 350km/h line will reduce journey times between the Chinese capital and Harbin, in the north-eastern Heilongjiang province, from a current average of 7h 45 min to around five hours.

The line is part of the Beijing-Harbin-Beijing-Hong Kong-Macao rail corridor, one of eight vertical and eight horizontal planned rail corridors currently under construction across China.