Construction of Texas high-speed line due to start in 2021

CONSTRUCTION of the 320km/h Dallas - Houston high-speed line is due to begin in the first half of next year following the publication of two key federal decisions in support of the project. 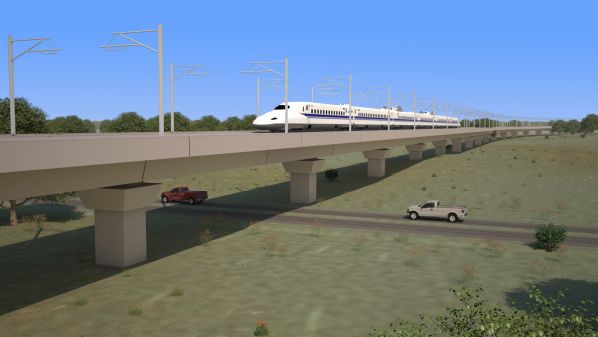 The Federal Railroad Administration (FRA) has released the final Rule of Particular Applicability (RPA) and Record of Decision (ROD) that establish federal safety standards for operation and give environmental clearance for the selected alignment, respectively.

“This is the moment we have been working toward,” says Mr Carlos Aguilar, CEO of Texas Central operating subsidiary Texas Central Railroad.

The RPA establishes comprehensive safety requirements governing signal and train control, track, rolling stock, operating rules and practices, system qualifications, and maintenance. According to Texas Central, it is based on a systems approach to safety, incorporating accident avoidance measures that are “significantly more stringent than those required for conventional US rail operations.”

The Texas high-speed rail system is slated to replicate the Japanese Tokaido Shinkansen system, which is operated by Central Japan Railway (JR Central) and has carried more than 10 billion passengers throughout its 55-plus year history with zero operational passenger fatalities and zero accidents.

According to the FRA, the “regulation was written specifically for this technology to maintain the integrity of the baseline safety case” of JR Central’s Tokaido Shinkansen, and establishes “regulatory requirements codifying the service-proven technological, operational, and maintenance aspects of the Tokaido Shinkansen high-speed rail system.”

The ROD completes the FRA’s environmental review process, which began in 2014 as required by the National Environmental Policy Act and culminated with the publication of the Final Environmental Impact Statement on May 29. It also formally selects the alignment the line will follow alongside interstate highway 45. FRA analysed six end-to-end build alternatives as well as a no-build alternative.

Passengers will be able to travel between Dallas and Houston - with an intermediate station in the Brazos Valley near Texas A&M University - on a dedicated right-of-way in less than 1h 30min, at a maximum speed of 320km/h.

“The momentum toward construction is building every day,” Texas Central told IRJ’s sister publication Railway Age. “At this time, we anticipate construction starting in the first half of 2021. Engineers, architects and environmental experts are working on many fronts, including infrastructure, engineering and design; development of world-leading safety practices; design of the interior of the trains; and the rider experience.” A testing and commissioning period is slated to follow in 2025, with service starting in 2026.

In September 2019, Texas Central signed a design-build contract with the Webuild Group (formerly Salini Impregilo) and its US subsidiary and joint-venture partner Lane Construction. They will provide infrastructure work, including design and construction of the viaduct and embankment sections along the entire route; installation of track; and construction of related buildings and services that will house maintenance and other rail system equipment.

Now that the RPA and ROD have been released, Texas Central “is focused on securing funding, followed by the start of physical construction,” the company told Railway Age. “Texas Central Railroad has already secured letters of intent from banks in Japan and Europe, reflecting the financial viability of the project, and is now working toward achieving formal commitments from these entities, as well as others in the United States.”

Texas Central expects to create more than 17,000 jobs during construction and have a multibillion-dollar economic impact across the US. However, the company laid off nearly 30 employees on March 27.