THE first test run with a Talgo high-speed train was conducted on the southern section of Saudi Arabia’s Haramain high-speed line between Jeddah and Mecca on October 17. 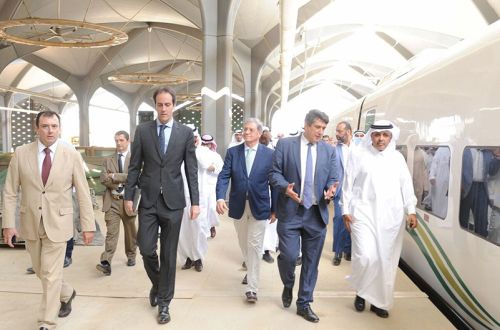 Dr Rumaih Al-Rumaih, head of Saudi Arabia’s General Authority of Railways, and Dr Bashar AlMalik, CEO of Saudi Railway Company (SAR), were onboard the inaugural trip.
Mecca’s high-speed station is located in the district of Rusayfah at the entrance to the holy city and about 4km from the Holy Mosque.

The 450km Haramain high-speed line will connect Saudi Arabia’s two holy cities of Mecca and Medina with intermediate stations in Jeddah, King Abdulaziz International Airport in Jeddah, and KAEC. The double-track electrified line has a design speed of 360km/h. An opening date for the new line has yet to be announced.

Dr Bashar AlMalik (left) seated next to Dr Rumaih Al-Rumaih on the inaugural trip to Mecca.