Frecciarossa 1000 on the starting blocks

TRENITALIA rolled out its next-generation high-speed train, the ETR 1000 Frecciarossa, at AnsaldoBreda's Pistoia plant on March 26, when the first completed train was christened Pietro Mennea in honour of the Italian 100m sprinter who died on March 21. 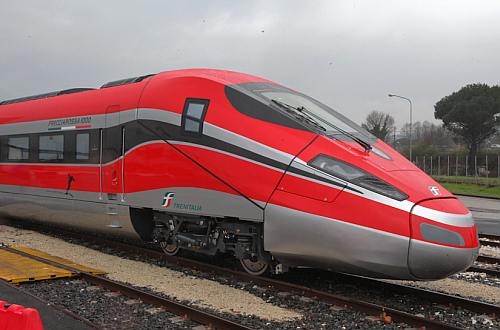 Trenitalia awarded a €1.2bn contract to Bombardier and AnsaldoBreda in 2010 for 50 eight-car sets, the first order for the V300 variant of Bombardier's Zefiro high-speed train.

The ETR 1000 is capable of 400km/h, and will operate at commercial speeds of up to 360km/h on the Italian high-speed network. This means the introduction of the new trains will reduce the fastest journey times between Rome Termini and Milan Central to 2h 15min, while Rome Tiburtina - Milan Rogoredo will fall to 1h 59min.

Trenitalia specified the train for operation in France, Germany, Spain, Belgium, The Netherlands, Austria, and Switzerland and they will therefore be equipped for operation on 25kV ac, 15kV ac, 3kV dc, and 1.5kV dc electrification systems.

The 202m-long train has distributed power with 16 powered axles providing starting acceleration of 0.7m/s and a overall power rating of 9.8MW.

The trains will be more environmentally sustainable than their predecessors, and all materials will be 85% recyclable and 95% renewable.

Certification is already underway with the aim of introducing the first trains into commercial service next year.

According to Trenitalia, Frecciarossa 1000 "will be distinguished by an aerodynamic profile of absolute originality and effectiveness and design of great refinement and elegance, with a focus on comfort, space, and accessibility."