THE recently-appointed Chairman of HS2 Ltd, the company responsible for developing a Y-shaped high-speed network linking London with central and northern England, has urged the government to bring forward the construction of the second phase of the project. 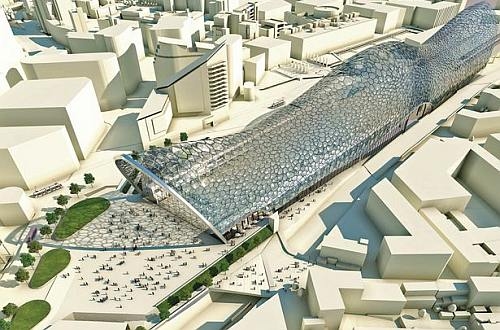 In a report entitled HS2 Plus, which was issued on March 17, Sir David Higgins calls for the 69km Phase 2 section between Lichfield and Crewe to be brought into the first phase, which would see trains running on this part of the route in 2027, six years earlier than scheduled. The report indicates that this would bring the economic benefits of HS2 to north-west England far sooner than currently proposed. The report suggests that Crewe – a major junction which already has good rail links to surrounding towns and cities – could act as a multimodal interchange for the region.

The report calls for a more regional approach to developing the second phase lines from Birmingham to Leeds and Manchester in order to integrate HS2 more closely with local transport plans. Higgins says there is a need to look at how the line is integrated with other transport infrastructure to maximise its economic impact. He stresses that projects outside HS2's remit are "hugely relevant" to final decisions on the route, citing upgrading of the Leeds – Manchester route; reopening of Wortley curve to improve services to Bradford and Wakefield; and electrification of the Leeds – Selby – Hull line as key regional schemes.

At the southern end of the network Higgins proposes a more ambitious redevelopment of the line's London terminus at Euston. "Does it meet the principles of standing the test of time and acting as a catalyst for change in helping to regenerate the local area," Higgins asks. "Does it deliver the best value to both the local area and the national economy?"

Higgins proposes a level deck design for the station, housing, retail and commercial development above the site.

However, the report also suggests the government should reconsider the benefits of constructing a link between HS2 and HS1, Britain's high-speed link to mainland Europe. Higgins argues that given the proximity of Euston to the HS1 terminus at St Pancras, the £700m cost of the link may not represent good value and suggests looking at alternatives that would deliver the benefits of a link without compromising existing services.

Transport Secretary Mr Patrick McLoughlin responded immediately by saying that the HS1-HS2 link would be eliminated from the project. "The link requires too many compromises in terms of impacts on freight, passengers and the community," he says. "I therefore intend to take the necessary steps to remove the link from the Bill and withdraw safeguarding as soon as possible."

"Our infrastructure has not stood the test of time: it is a series of imperfect compromises which have not provided a strategic answer to the needs of this country," Higgins says in the report. "It has not maximised local synergies and it has reinforced the imbalance in the national economy, rather than acting as a catalyst for change. That is the problem: HS2 Plus can be the answer."

The full HS2 Plus report is available on the HS2 Ltd website.