The line will provide high-speed services to Nagasaki when it opens next year. 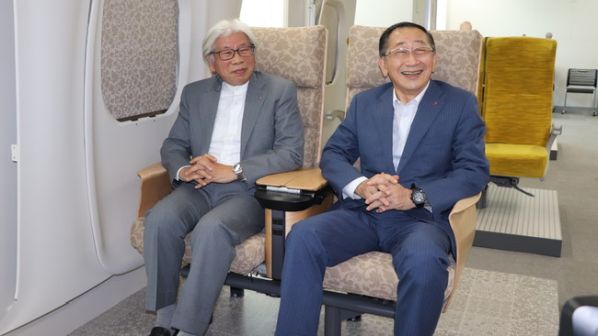 JAPAN’s Kyushu Railway Company (JR Kyushu) has unveiled details of the six-car Shinkansen trains that will operate on the West Kyushu line connecting Takeo Onsen and Nagasaki, which is due to open in autumn 2022.

The new trains are dubbed Komome, which translates as seagull, with a stylised emblem on the side of the train representing a bird in flight alongside the name in brushed calligraphy. A red line along the side of the train will represent JR Kyushu’s company colours. The trains are a shortened version of the 16-car N700S shinkansen trains operated by JR Central. Komome is a nod to the limited express service that was launched to Nagasaki under the same name in 1961.

The interior has been designed to be “gentle, bright, fun, comfortable and beautiful.” The first three cars will have reserved seating in a 2+2 layout, with 40 seats in the first car with a chrysanthemum design on the upholstery; 76 seats in the second car with a lion upholstery design; and 47 seats in the third car with a karakusa upholstery pattern.

The trains feature an improved ATC and braking system to reduce braking distance in the event of an earthquake, as well as emergency features including a battery system to allow the train to move during power failures. A communication system will also be installed to allow passengers to talk to onboard staff, and CCTV cameras are installed in the roof as well as by the doors. Toilets will also remain operational during power failures.

Power outlets will be installed at all seats, along with barrier free areas for passengers with limited mobility. The trains will use less energy through the use of next generation SiC semiconductor components, and a redesigned nose.