TWO people have died and 31 are reportedly injured following a high-speed train accident involving a Trenitalia ETR 1000 set on the high-speed line south of Milan on February 6. 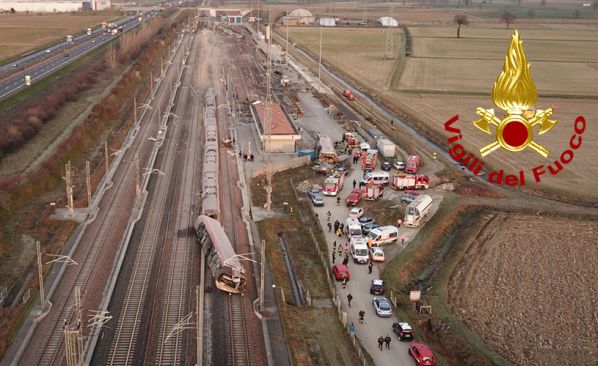 Trenitalia’s 9595 Milan - Salerno service departed Milan Central Station at 05.10 and left Milan Rogoredo at 05.20. The accident subsequently occurred at around 05.30 on a section of the high-speed line adjacent to the A1 highway near Casalpusterlengo, in the province of Lodi, around 50km southeast of Milan.

Judging by video footage from the scene of the accident, it appears that the train derailed at a switch. The leading driving car detached from the rest of the train and veered left, crossing the adjacent loop track and four sidings, colliding with two freight wagons and coming to rest on its side facing the opposite direction of travel beside a building. One of the lead car’s bogies smashed into and was embedded in the corner of the building. The rest of the train derailed and continued down the ballast between the loop track and the main southbound track , with the second coach also coming to rest on its side. The rest of the train remained upright.

Five maintenance workers who were carrying out maintenance work on the switch where the train derailed the night before accident occurred have been questioned by investigators along with Mr Michele Viale, CEO of Alstom Ferroviaria, regarding components supplied for the switch.

Italian State Railways (FS) confirmed in a statement on its website that two drivers were killed in the accident.

“FS and all railway workers express deep condolences for the death of the two fellow drivers of the 9595 Milan - Salerno high-speed train,” the statement said. “FS is offering maximum support to the family members of its colleagues and all the people involved in the accident this morning.”

“Trenitalia and RFI [Italy’s infrastructure manager] have already started a commission of inquiry and will give maximum availability to the competent bodies to collaborate,” Mr Gianfranco Battisti, FS CEO, said at the crash site.

Trenitalia and NTV.italo trains are being diverted onto the conventional line via Piacenza, between Milan and Bologna, adding 400 minutes to journey times. Trenitalia cancelled 22 Frecciarossa trains on February 6 and partially cancelled three Frecciabianca and six Inter City trains. NTV also cancelled or delayed services on February 6.