THE Japanese government has reached a deal to accelerate the construction of two Shinkansen lines, bringing forward completion by up to five years. 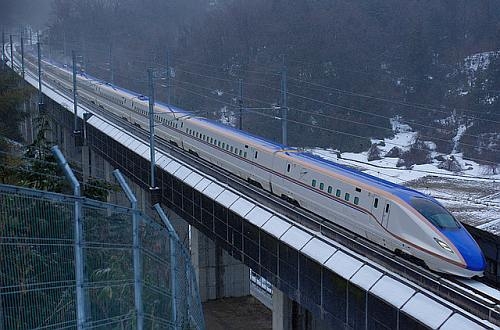 In the run-up to the general election on December 14 the Liberal Democratic Party, which now holds a majority in the House of Representatives in coalition with the Komeito party, had campaigned to accelerate the expansion of the Shinkansen network with the aim of spreading the benefits of economic recovery to all regions of Japan.

According to reports in the Japanese press, the government and the ruling coalition agreed at a meeting on January 8 to bring forward the completion date for the 121km Kanazawa – Tsuruga extension of the Hokuriku Shinkansen from 2025 to 2022, and a decision will be made this summer on whether to open the Kanazawa – Fukui section as early as 2020. The adjoining 228km Nagano – Kanazawa section of the Hokuriku Shinkansen will open in March this year.

Meanwhile the 211km second phase of the Hokkaido Shinkansen from Shin-Hakodate to Sapporo is now due to open in 2030, five years earlier than previously scheduled. Testing is currently underway on the initial 149km section of the route from Shin-Aomori to Hakodate, which is due to open next year.

In addition, the extension of Kyushu Shinkansen from Takeo-Onsen to Nagasaki will also be brought forward, although no dates have been given for this project.