CENTRAL Japan Railway Company (JR Central) previewed its next generation Shinkansen train, the N700S, on October 1, when journalists were invited to view a driving car bodyshell and interior mock-ups at the Nippon Sharyo plant in Toyokawa in Aichi prefecture. 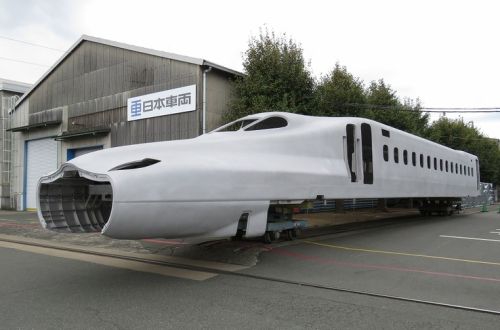 Energy consumption at 285km/h will be reduced by 7% compared with the N700A, which was introduced in 2013. At just 11 tonnes, the drive system will be 20% lighter thanks largely to a new-generation silicon carbide (SiC) semiconductor, which JR Central has developed in partnership with Toshiba, Hitachi, Mitsubishi Electric, and Fuji Electric. JR Central claims these enhancements will give the N700S the lowest axleload of any high-speed train, at just 11 tonnes.

The introduction of a more compact traction system will reduce the weight of each vehicle by 140kg.

A redesigned nose, which has been developed to reduce air resistance, noise, and vibration, will make the N700S visually distinctive from the current N700A.

The N700S will feature a new lightweight bogie, which has been developed to reduce mass, simplify maintenance and minimise noise. Enhanced active damping control will improve ride quality for Green Car passengers. The new bogie results in a weight saving of 75kg per car compared with the N700A.

In the event of an earthquake, the stopping distance for an automatic emergency brake application at 285km/h will be reduced to 2.8km, compared with 3km for the N700A. This will be achieved through improvements to the ATC and braking systems.

The underfloor equipment layout has been optimised to increase the flexibility of the design, with just four vehicle types in each formation. This means it will be possible to use the same vehicle designs to produce eight, 12, and 16-car trains.

A new pantograph design will improve current collection and reduce maintenance. A revised support structure will reduce the overall weight of the pantograph by 50kg.

A 16-car pre-series train will be begin trials in March 2018 and production trains are due to enter service on the Tokaido Shinkansen between Tokyo and Osaka in 2021.