Construction is expected to start in 2023. 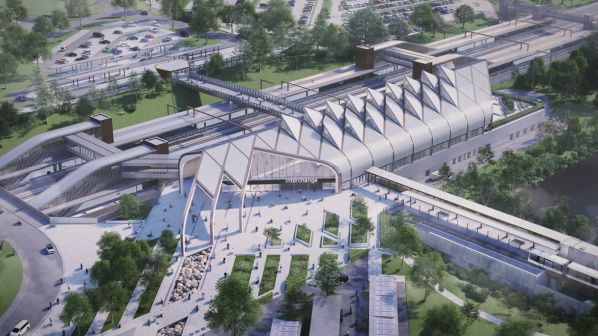 HS2 Ltd has selected Laing O’Rourke to build Interchange Station in Solihull in a contract that is worth up to £370m.

Laing O’Rourke will work with HS2 Ltd to finalise the design in an initial phase and then construct the station, with work set to commence in 2023. The contract will be signed following completion of the standstill period.

The 150ha construction site is located in a triangle of land between the M42, A45 and A452 highways and is the only intermediate station on the Phase 1 of the new high-speed line. The station will serve as the interchange for trains heading to the Birmingham city centre terminus at Curzon Street, to Crewe under Phase 2A and to Manchester under Phase 2B, and to the East Midlands hub near Nottingham.

HS2 main works contractor Balfour Beatty Vinci is currently preparing the site for construction. Modular bridges have been built over the M42 and A446 to provide road access to the new station site.

HS2 Ltd has worked with Arup on the design of the station, which has rated as outstanding under the Building Research Establishment Environmental Assessment Method (BREEAM), certified by GWP Project Services. The station is the first globally to achieve this accreditation, which recognises climate change resilience features, including maximising natural daylight and ventilation and a modular roof design which can capture rainwater for reuse. The entire building is designed for future adaptability with features to enable net zero carbon emissions from day-to-day energy consumption.

Arup says the design minimises embodied carbon through the use of lifecycle assessment reporting for key building materials and waste at source through material efficiency analysis. Energy efficient technology will be incorporated, such as air source heat pumps and LED lighting. In addition, the station and maintenance facility for the Automated People Mover (APM) system serving the interchange, also designed by Arup, have over 2,000m2 of solar panels to generate zero carbon electricity.

“The station has been designed to be net zero in operation, which is a key part of HS2’s strategy to reduce carbon and our ambition to build the most sustainable railway in the world,” says Mr Les Holmes, HS2 Ltd’s station director.