EUROSTAR has reached agreement with Netherlands Railways (NS) to launch a service between London and Amsterdam starting in December 2016 as part of a package of measures announced by the Dutch cabinet on September 27 following the withdrawal of the V250 Fyra trains. 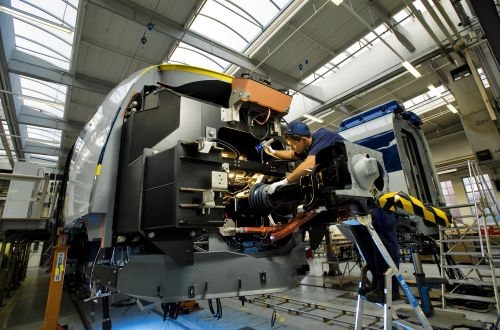 A Siemens e320 train under construction for Eurostar.

Eurostar will operate two trains a day in each direction using its new e320 multi-system trains on order from Siemens. The trains will call at Brussels Midi, the current terminus for Eurostar services from London, Antwerp, Rotterdam and Schiphol Airport with a London – Amsterdam journey time of four hours.

"We have long been ambitious for expansion to new destinations so today's announcement marks a major advance in our growth plans," says Eurostar's CEO Mr Nicolas Petrovic. "With over 3 million passengers travelling by air between London and Amsterdam, this is one of Europe's most popular routes."

The Dutch cabinet approved the reintroduction of the Benelux service on October 7. This will operate 10 times a day between The Hague, Breda, Antwerp and Brussels. The service will be extended to Amsterdam at the end of next year and the frequency will be stepped up to 16 trains a day. The frequency of the Amsterdam – Brussels – Paris Thalys service is also being increased on October 7 with the addition of two round trips per day.

In addition, a service will be introduced between Eindhoven, Tilburg and The Hague using the high-speed line north of Breda.

The cabinet has decreed that passengers will not have to make reservations or pay a supplement for travel on the services which replace Fyra, except for travel on Thalys and Eurostar high-speed trains. The Dutch Ministry of Infrastructure and Environment has agreed to cover any operating losses incurred by NS in running the new services. The plans will now be submitted to the Dutch parliament for approval.