Journey times will be further reduced following the approval of 330km/h gauge-changing trains. 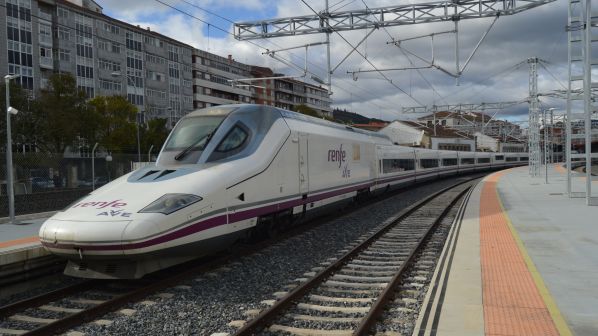 125,000 tickets have already been sold for the new services to Galicia.
Photo Credit: Treneros Zamora

AROUND 5000 passengers travelled on the first day of high-speed services between Ourense and Madrid on December 21, according to Spanish national operator Renfe.

Since the launch of ticket sales on November 23, there have been 125,000 tickets sold including promotional €15 tickets to celebrate the arrival of high-speed rail in Galicia.

The standard-gauge line allows AVE services to operate at 300km/h. However, 250km/h class 130 and 730 Alvia gauge-changing trains will also be used on the line, operating from Ourense to A Coruña, Ferrol, Lugo, Pontevedra and Vigo. Renfe is certifying the first gauge-changing trains to operate at 330km/h, and once these begin operating journey times will be further reduced by 20 minutes between Madrid and Galicia.

Initially the line will reduce journey times and improve frequencies on the following routes: