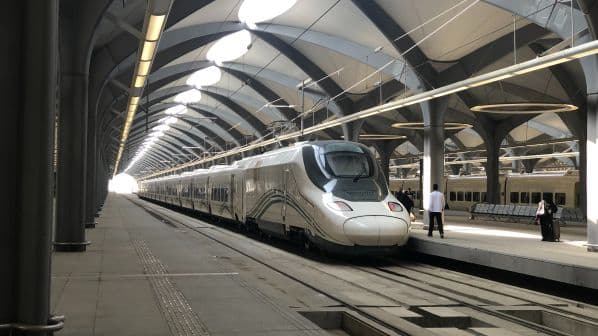 THE Haramain high-speed line between Mecca and Medina has carried a total of 5.6 million passengers since services resumed on March 31 2021.

Spanish national operator Renfe, which forms part of the consortium which operates the 453km high-speed line, says that 2022 was marked by a resurgence in demand following the Covid-19 pandemic.

Under the restrictions on travel within Saudi Arabia, high-speed services were suspended from April 2020 until March 31 2021. Since then over 23,500 trains have been operated, with passenger numbers steadily rising to reach 500,000 a month in November 2022.

These services have operated over 7 million km with train punctuality above 97.5%, Renfe reports.

Over 80 services a day have been provided at peak times, with trains operating in multiple to carry pilgrims between the holy cities of Mecca and Medina during Ramadan and Hajj.

High-speed services between Mecca and Medina began on December 31 2017 with trial operation of 111 services carrying over 15,880 invited passengers.

The first commercial services began on October 11 2018. The full timetable was introduced on March 31 2021 when the 12-year operating component of the contract to build, operate and maintain the high-speed line came into force.

There is an option to extend this term to 17 years.