SPAIN is planning to install only single track on most new sections of high-speed line in a bid to reconcile ambitious plans to extend the reach of the standard-gauge network with the budgetary restraints imposed by the economic crisis. 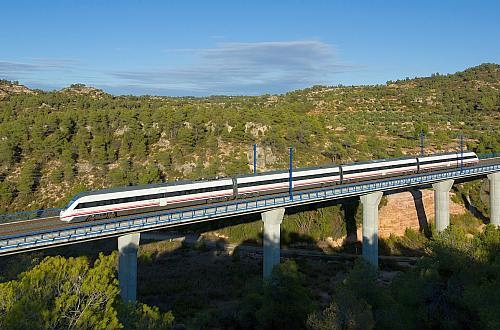 The Ministry of Public Works and Transport and the newly-created high-speed infrastructure manager Adif-AV have decided that several high-speed lines currently under construction will have single track installed despite having been designed and built for double track, including tunnels and bridges. Passing loops will ensure that the infrastructure can be used at capacity, if needed.

Furthermore, the new strategy will affect the lines connecting Valladolid with Leon and Burgos, which are currently under construction. Double track will be installed from Valladolid to Venta de Baños and Palencia, but roughly half of the 110km stretch from Palencia to Leon will be single track. The 75km-long Venta de Baños – Burgos section, which is expected to connect in the future with the Basque Y and France, will be almost entirely single-track (67km).

Adif-AV, whose debt is expected to reach €15.2bn in 2014, has also considered completing the Antequera – Granada branch off the Madrid – Malaga line and the Murcia – Lorca section on the Mediterranean Corridor as single-track lines.

In addition, consideration is being given to the possibility of opening two more lines not only single-track but with broad gauge instead of standard-gauge track, due to the slower-than-expected development of other parts of the high-speed network. This concerns the Pajares Base Tunnel between Leon and Asturias, and an isolated section of line between central Extremadura and the Portuguese border, which would not be even electrified.