TEXAS Central has released details of the interior layout specifications of the fleet that will operate on the planned 390km, 320km/h Dallas - Houston high-speed line. 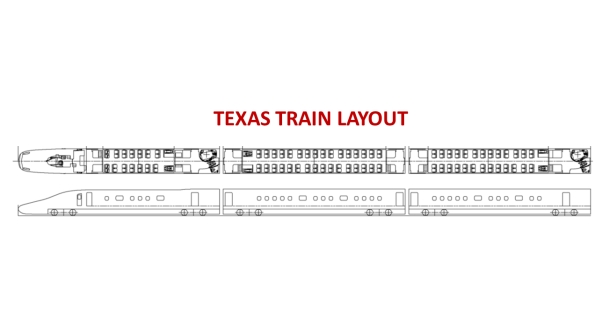 The trains will feature 2x2 seating in standard class and 2x1 seating in first class, along with 81cm-wide aisles and audio and visual passenger information. The backs of each seat will be 104cm apart, with each 50cm-wide seat able to recline. The windows will be 50cm-wide and 52cm-high, and will be equipped with individual blinds and double-glazed UV safety glass. Wi-Fi will also be available.

The fleet will meet Americans with Disabilities Act (ADA) standards, with areas for wheelchairs and attendant seating and barrier free access down the length of the train. The toilets will be ADA accessible, and station platforms will have no-step entry to the train.

Texas Central is reviewing requirements to accommodate service animals on the trains.

Renfe, which was selected alongside Adif as a strategic partner for the operation and maintenance of the line in October, has announced that the contract will be worth $US 6bn in revenue for the Spanish operator.

Renfe has signed a pre-agreement, with the contract that will run until 2042 currently being drafted.

Renfe of America, a company established for the development of this and other projects in the American territory, has been working since last year in the consulting phase of the line.

Salini Impregilo will be in charge of building the infrastructure, which it says will take six years. Renfe will subsequently be responsible for the line maintenance and train operation from 2026 to 2042.

Renfe says it will receive $US 311m infrastructure supervision and consulting services during the design and construction phase, and $5.6bn from the operation and maintenance between 2026 and 2042.

Texas Central is also considering expanding the line to Austin and San Antonio, which Renfe says could expanded the cooperation between the companies.