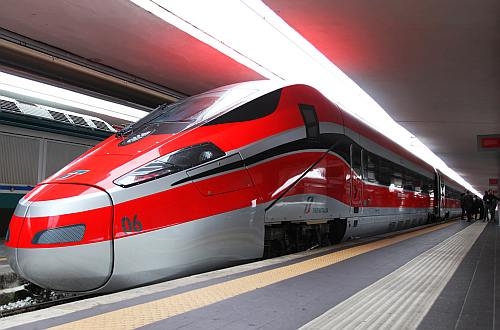 The train departed from Milan Central at 13.30 and arrived in platform 1 at Rome Termini at 16.09, where it was greeted by members of the press.
The eight-car sets will enter public service on June 14 with six trains operating eight non-stop Rome – Milan services. Seven of these services will start from Turin and four from Naples. As more trains are delivered the fleet will begin to serve other Italian cities including Reggio Emilia, Bologna, Florence, and Salerno.
Initially the trains will be limited to 300km/h under authorisation from the National Authority for Railway Safety (ANSF), which has given the green light for commercial use of the trains after two years of testing on Italian conventional and high-speed lines. The trains have also undergone trials on the test circuits at Florence Osmannoro and Velim in the Czech Republic.
FS CEO Mr Michele Elia said that certification of the train for operation at up to 360km/h on the Italian high-speed network should be completed by the end of this year.
Each train seats 457 passengers, including two wheelchair spaces, with four classes of accommodation – executive, business, premium, and standard.
In a speech during the launch ceremony at Rome Termini, FS president Mr Marcello Messori noted the low carbon impact of the new train and stressed that the fleet of 50 trains will be truly European and approved for operation in France, Germany, Spain, Austria, Switzerland, the Netherlands, and Belgium, enabling Trenitalia to compete in the international high-speed market.
Messori also mentioned that the launch of the train effectively marks the end of an era for FS as a public company as it prepares for partial privatisation next year.
Elia added that the delivery of Frecciarossa 1000 will enable ETR 500 high-speed trains to be redeployed on other routes such as Milan – Venice and the Adriatic coast.
The ceremony also marked a transition for supplier AnsaldoBreda, with Finmeccanica CEO Mr Mauro Moretti – himself a former FS CEO and employee of 40 years – welcoming Hitachi Rail Europe Mr Alistair Dormer.
Bombardier chief operating officer Dr Lutz Bertling spoke of his company's cooperation with AnsaldoBreda and the short lead time in developing the trains, 50 of which were ordered by Trenitalia in July 2010 in a deal worth €1.54bn.
Frecciarossa 1000 is the first high-speed train to receive EPD environmental certification with CO2 emissions of 28g/km/passenger.
The trains are being built at Bombardier's Vado Ligure plant and AnsaldoBreda's Pistoia facility and deliveries are due to be completed in 2017.
Maintenance will be carried out by AnsaldoBreda and Bombardier under a 10-year contract worth around €250m.