Route will have a maximum speed of 200km/h. 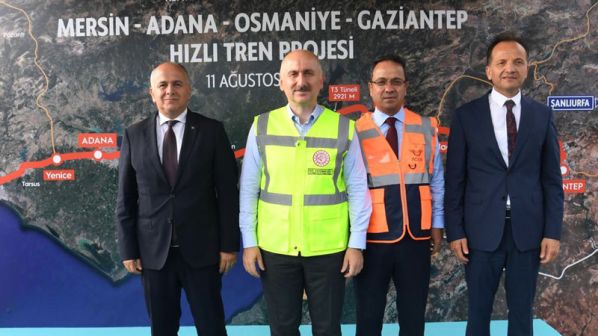 TURKEY’s minister of transport and infrastructure, Mr Adil Karaismailoğlu, has announced that the high-speed line under construction from Mersin to Adana, Osmaniye and Gaziantep will be put into service to Osmaniye in 2025.

Karaismailoğlu was speaking during a site visit to inspect progress with civil works on the 58km Toprakkale - Bahçe section of the Mersin - Gaziantep route. This section has 32 tunnels with a total length of 16.5km, and six bridges and viaducts that are 602m long in total. There are also 30 bridges taking roads under or over the new railway.

The minister reported that civil works were 56% complete on 13km of tunnels. “We plan to complete our line in 2025 and open it for the service of our people,” Karaismailoğlu says. “This high-speed line will be one of our most important lines.”

Work on the Mersin - Gaziantep high-speed line is being undertaken in six sections. When the double-track electrified route with a maximum speed of 200km/h is completed, the distance by rail from Mersin to Gaziantep will be cut from 361km to 295km. The journey time from Mersin to Gaziantep will be reduced from 6h 23min to 2h 15min, and that from Adana to Osmaniye cut from 1h 20min to 40 minutes.

“We are also continuing construction, tendering and surveying work on a total of 13,978km of railway lines across the country,” Karaismailoğlu says.

“We will create a safe, fast, efficient and effective railway infrastructure,” Karaismailoğlu says. “We will meet 35% of the railway’s total energy needs from renewable sources."