THE Valladolid - Palencia - León high-speed line was opened to traffic on September 30, a day after it was officially inaugurated by Spanish prime minister Mr Mariano Rajoy and less than a week after the opening date was confirmed. 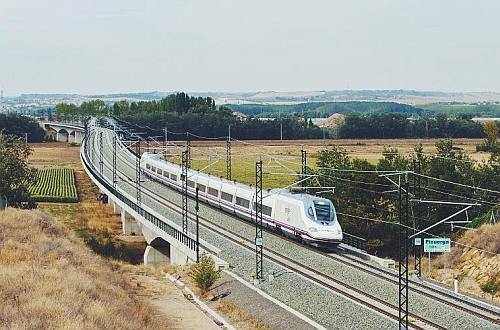 Renfe trains started commercial service on the 162.7km line, which is the first in Spain to have single-track installed to minimise construction and maintenance costs, despite being designed and built for double track. The total investment in the project was €1.6bn.

The low commercial speed is primarily a consequence of opening the line without ETCS Level 2 in operation. A build-maintain contract was awarded in March 2014 to an Alstom-Bombardier-Indra consortium with a delivery time of 24 months, and the system is currently being installed along the new line.

In the meantime Adif is using the national ATP system Asfa, usually used only as a backup on high-speed lines, to control train movements. The downside of the early opening is that the use of Asfa limits the maximum speed to 200km/h in the Valladolid - León stretch.

The opening will also benefit destinations served by variable-gauge Alvia trains in the Asturias and Cantabria region, with time savings of around 30min and 20min, respectively.

The line has been equipped with a standard-gauge single track, electrified at 25 kV 50 Hz ac, and it will be equipped with ETCS Level 2 along its entire length. The line has a design speed of 350km/h and was built for mixed-traffic operation, although it will be used only by passenger trains with a commercial speed of 300km/h when ETCS is commissioned.

The line is double track between Valladolid, Venta de Baños and the outskirts of Palencia, but around half of the 110km stretch from Palencia to León is single track, along with an 8km stretch on the Valladolid - Campo Grande station. This configuration is considered adequate by Adif accommodate demand in the coming years, although it is expected to limit the number and the speed of services.

The line traverses Castilian plateau and civil works include the 1998m Peña Rayada tunnel and a 1336m viaduct near Valladolid, which spans the Pisuerga river twice.