THREE months after its inauguration was postponed with just a few hours’ notice, the first stage of the Aarhus light rail network was officially opened on December 21. 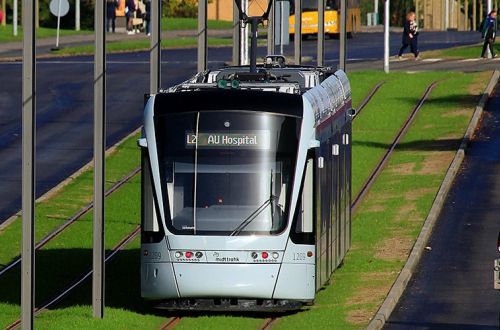 Passenger services were previously due to start on September 23, but the day before the opening ceremony the Danish Transport, Construction and Housing Authority refused to sign off the safety case approving Keolis as operator and Aarhus Letbane as infrastructure owner.

The affair became a political issue in the recent local elections and trams have been ghost running the timetable ever since, operating around 100,000km without passengers.

On December 20 the safety documentation was finally approved, and passenger services began at 10.15 on December 21 on the 12km Stage 1 from Aarhus Central Station to Skejby University Hospital. Next year the line will be extended onto the main line network, initially to Odder in the south and later to Grenaa in the north, a total of 110 km.

Detailed design work has already started on the next stages of the system which will include an extension of the present line from Lisbjerg school to Hinnerup, a two-station station branch to serve the Aarhus Ø development in the harbour area, and a branch line from just south of the Aarhus Central Station to Brabrand via the northwest of the city.

A detailed description of the project can be viewed here.