THE recently-elected Berlin City "Red-Red-Green" coalition government comprising the SPD or Social Democrats, "Linke" party and the Greens has concluded a wide-ranging coalition agreement covering all aspects of the city's government, including a major expansion of the tram network. 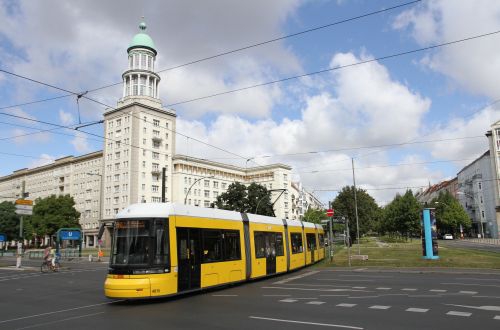 BerlinStrategie 2030 sets ambitious targets for the construction of new light rail infrastructure, expansion of cycling and pedestrian options, cancelling some road building schemes, a city-wide 30km/h speed limit, and removal of most traffic from Unter den Linden in central Berlin.

Expansion of S-Bahn services and the reopening of some regional lines are also proposed. Given the poor state of its finances, the City of Berlin will depend on successful lobbying of the German federal government to gain the additional funds necessary for some of its plans. Existing funds of €60m per annum will be allocated to the tram expansion project. No funds exist for additional trams so it seems likely some older vehicles will be retained at least in the short to medium-term.

Four tram projects already under development by Berlin Transport (BVG) will be prioritised for construction with work beginning as early as next year. These comprise:

In addition, five more tram lines will be developed in detail to enable construction to begin by 2021; these will see trams return to parts of the inner-city in the former West Berlin for the first time since the 1960s as well as expanding the already dense network in the eastern part of the city. The proposed routes include:

Increased frequencies on the S-Bahn suburban rail network, including a five-minute frequency for the Ring services are also part of the new coalitions' priorities. Plans for expansion of S-Bahn services west from Berlin Spandau via Falkensee to Nauen are supported. This plan also has strong backing from the neighbouring state of Brandenburg, although costs are estimated at €250m.

The coalition wants to take steps to give future administrations greater autonomy from DB Regio for S-Bahn operation and plans to create a rolling stock company to take ownership of the S-Bahn rolling stock fleet from 2028 onwards.

In addition, Berlin wants DB Networks to double-track the numerous remaining stretches of single track on the S-Bahn network and speed up the construction of the second and third phases of the Line S21 project which links the Ringbahn with Berlin Main Station, which would eventually connect with other S-Bahn lines south of Potsdamer Platz. The new government also supports the construction of the proposed Perleberger Brücke station north of Berlin Main Station, omitted from the current S21 project on cost grounds.

Support for reopening of regional lines for passenger services is also part of the new coalition’s transport policy. These include the NEB-owned Basdorf - Berlin Wilhelmsruh (- Berlin Gesundbrunnen) Heidekraut Line, much of which remains in use for freight traffic and the Berlin Schönholz - Hennigsdorf section of the Kremmener Line, which would enable the operation of through services to Gesundbrunnen and Berlin Main Station. This largely single -track line is currently used by S-Bahn trains but not regional services towards Pritzwalk.

The new city government wants to see better connections to major cities in neighbouring countries specifically Szczecin and Wroclaw in Poland and Prague in the Czech Republic.