WEST Midlands Combined Authority (WMCA) is this week expected to approve the Birmingham Eastside extension of the West Midlands Metro, which will provide a branch from the existing light rail line at Bull Street to High Street Deritend in Digbeth, via the proposed High-Speed 2 (HS2) Curzon Street Station. 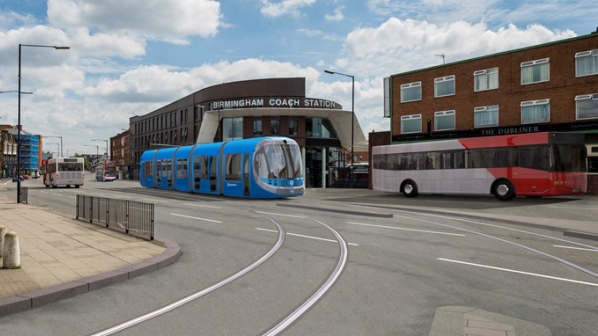 The £227m project includes construction of the 1.7km line, the purchase of battery powered LRVs and improvement works on Digbeth High Street. Under a package arranged by Transport for West Midlands (TfWM), part of WMCA, funding will be provided by central government, grants and the LRT network through borrowing against future West Midlands Metro profits. Local taxpayers will not fund the project.

Britain’s Department for Transport (DfT) approved the transport and works act order for the extension last month, meaning the full business case can now be presented for final approval.

Detailed analysis has shown that around £3 in economic value will be generated for every £1 invested in the extension, through improved journey times, more visitors attracted to the area, and the support of new commercial and housing developments.

The new extension will feature four stops, with 1.2km of the line catenary-free.

A phased construction of the line is set to begin later this year, starting with the new ‘delta’ link to the existing line which is likely to involve temporary closure of the existing line between Bull Street and Library stations and the diversion of some bus services. This closure is expected to take place in 2021 ahead of the opening of the extended Birmingham Westside line to Edgbaston, which is currently under construction along Broad Street.

Construction will conclude with completion of the section to the HS2 Curzon Street site in 2025.

The eastside extension, which will pave the way for the proposed East Birmingham to Solihull extension to Birmingham Airport via Bordesley Green and Chelmsley Wood, is part of a £1.5bn West Midlands Metro expansion programme, with five projects now at various stages of development.

“This is just the start, in the longer term we are looking to extend the line further and serve the deprived communities of east Birmingham with fast and reliable tram line to better connect people to jobs and leisure opportunities across the region,” says Mr Ian Ward, the WMCA portfolio holder for transport and leader of Birmingham City Council.

For detailed information on light rail projects from around the world subscribe to IRJ Pro.