VIENNESE public transport operator Wiener Linien announced on December 1 that it has selected Bombardier as preferred bidder for a contract to supply up to 156 low-floor LRVs in a deal worth up to €562m. 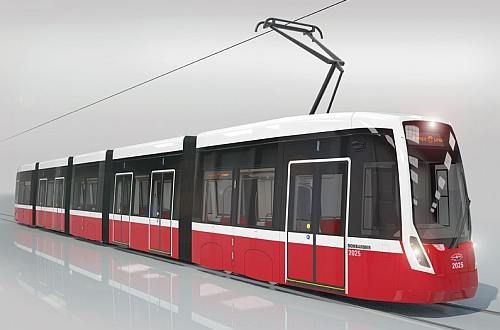 The Flexity vehicles will be assembled in Vienna at Bombardier's plant in Donaustadt and the fleet is due to be delivered between 2018 and 2026, enabling the withdrawal of high-floor E1 and E2 trams which date from the 1970s. Each 34m-long five-section vehicle will accommodate up to 211 passengers. The contract will include maintenance, which will be carried out by Wiener Linien staff on behalf of Bombardier.

Wiener Linien announced last year that it would launch a new tender for LRVs instead of exercising an option for additional Ultra-Low Floor (ULF) LRVs from Siemens, which has become the city's standard tram design over the last 15 years.

Siemens supplied an initial batch of 150 ULFs to Wiener Linien from 1997 onwards, and is currently delivering a second tranche of 150 vehicles, the last of which will roll off the assembly line at the company's Simmering plant in Vienna in 2015. A final batch of 32 ULFs was ordered earlier this year for delivery in 2016.

In the final round of the procurement process Bombardier and Siemens were the only remaining bidders, with Siemens offering an upgraded version of the ULF.