A GROUNDBREAKING ceremony was held on August 21 to mark the official start of construction on the first light rail line in Waterloo, Ontario. 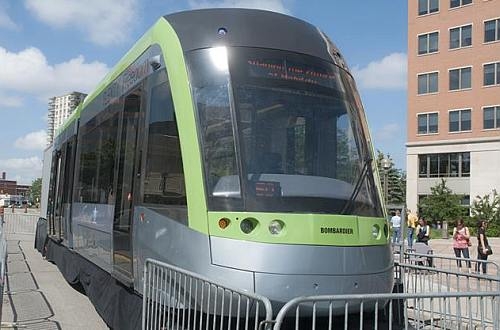 The ceremony was attended by Mr Peter Braid, Canadian member of parliament for Kitchener-Waterloo and parliamentary secretary for infrastructure, and took place at the site of the line's operations, maintenance and storage facility on Dutton Drive, Waterloo.

The 19km 16-station line will run from Conestoga Mall in Waterloo to Fairview Park Mall in Kitchener and is due to open in 2017. Services will be operated by a fleet of 14 Bombardier Flexity Freedom LRVs (pictured). Ridership is forecast to be around 27,000 passengers in the first full year of operation, rising to 56,000 by 2031.

Ontario has committed up to $C 300m in funding, with $C 265m coming from the Canadian government and $C 253m from the Region of Waterloo.