Edmonton light rail route due to enter service this summer. 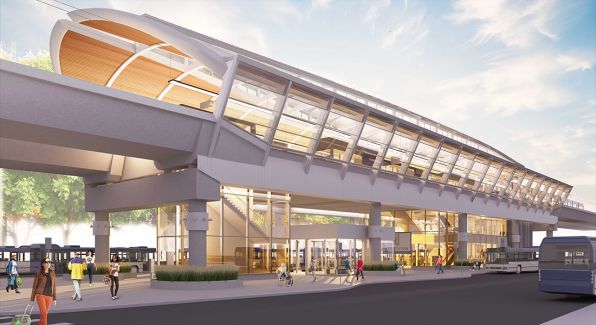 THE Valley Line Southeast light rail route in the Canadian city of Edmonton will not enter service this summer as scheduled, following the discovery of cracks in piers supporting elevated sections of the route.

This is the fourth time that opening has been postponed, with the previous delay due to disruption caused by the global Covid-19 pandemic.

The announcement was made by Mr Ronald Joncas, CEO of TransEd, the agency which is executing the project to build the 13.1km route with 11 stops, running from the centre of Edmonton to Mill Woods.

According to Joncas, engineering inspections are now underway, with preliminary findings indicating the need to strengthen some of the piers.

TransEd was working with the city authorities to explore options for strengthening the piers and to determine the additional construction work required.

Joncas said that safety was TransEd’s top priority, and that “no stone would be left unturned” to ensure the route provided a high-quality and safe public transport service over the coming decades.

No further details were provided of the cause of the cracks, and a new opening date has not been set.

The Valley Line Southeast route has been under construction since 2016, and will feature an elevated station incorporating a bus interchange and a park and ride facility, as well as interchange with Edmonton’s two existing LRT routes at Churchill Square.

These routes are operated with high-floor trains, but for the Valley Line Southeast the city of Edmonton ordered 26 low-floor Flexity Freedom LRVs from Bombardier, which will provide level boarding at street-level stops on the route.