DARMSTADT Regional Council has approved a planning application for a 1.1km extension of the city’s metre-gauge tram network to the Darmstadt Technical University campus on Lichtwiesenweg in the south of the city. 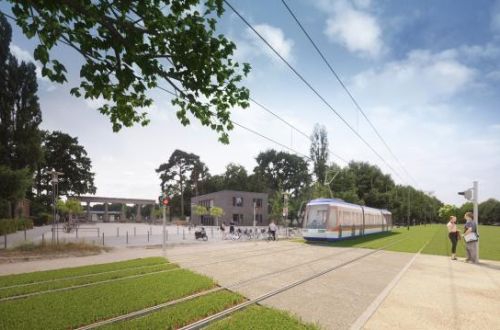 The project, which is being undertaken jointly by public transport company HEAG Mobilio and Darmstadt Science City, involves construction of a branch off the current Line 2/9 alignment from a junction at Hochschulstadion station, along Lichtwiesenweg to terminate outside the university’s new auditorium and media centre.

The branch will serve one intermediate station (Kletterhalle) and Hochschulstadion station will rebuilt as part of the project.

Line 2 services, which currently terminate at Böllenfalltor, will be rerouted onto the Lichtwiesenweg line.

With planning approval secured, HEAG Mobilio, now plans to apply for financial support from the state of Hessen under the Municipal Transport Financing Act (GVFG) and the Financial Compensation Act (FAG), which together could finance around 60% of the project.

Construction will begin next year with the line due to open in December 2020.