THE first of 38 low-floor LRVs being supplied to Izmir by the Eurotem joint venture of Hyundai Rotem and Turkish State Railways (TCDD) subsidiary Tüvsaş was presented to the mayor of Izmir Mr Aziz Kocaoglu at the company's plant at Adapazari in northwest Turkey on October 14. 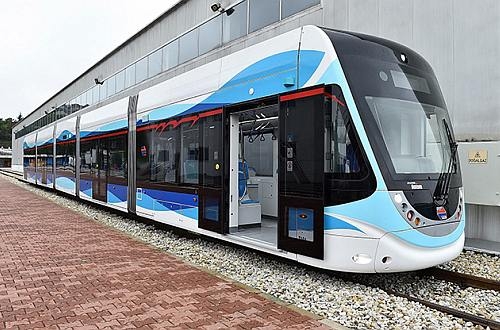 Izmir Metropolitan Municipality placed a $US 80m order in August 2014 for the vehicles, which will be used on two new light rail lines serving the districts of Konak and Karsiyaka. The 32m-long five-section bidirectional LRVs will accommodate up to 285 passengers.

The first three vehicles will be delivered in December and the final units will arrive in Izmir in February 2017.

The Fahrettin Altay Meydani - Konak - Halkapinar line will be 12.6km long with 19 stations and a fleet of 21 vehicles, while the 8.8km Karşiyaka - Mavişehir line will have 14 stations and 17 LRVs. Both lines are being built by Turkish construction company Gülermak and are due to open in 2017.