LOS ANGELES County Metropolitan Transportation Authority (LACMTA) has taken delivery of a pre-series LRV from Kinkisharyo under a contract for 78 vehicles awarded in April 2012. 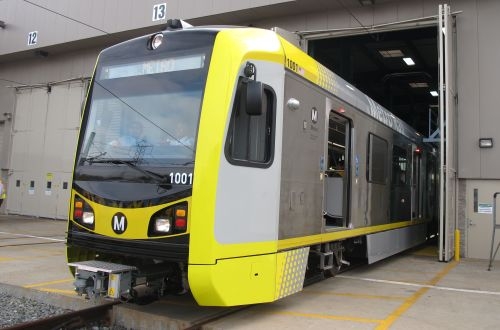 LACMTA exercised an option for another 97 cars in 2013 representing a total investment of $US 739m. It has two more options for an additional 60 LRVs.

"This pilot car is the vanguard of our expanding rail fleet," says Mr Eric Garcetti, LACMTA board chair and mayor of Los Angeles. "It will undergo extensive testing over a period of months and the results will be passed on to Kinkisharyo for analysis before moving forward with the initial order of 78 production vehicles."

The cars will be partially constructed by parent company Kinki Sharyo in Japan and will then be shipped to Kinkisharyo's plant in Palmdale, California, for final assembly. The company plans to set up a plant to manufacture bodyshells when it finds a suitable location in the United States. The six-axle articulated LRVs have stainless-steel bodyshells and will each seat 68 passengers.

The initial 78 LRVs are scheduled to be in service by January 2017. They will be used on the 17.7km Gold Line Foothill extension to Azusa and the 10.6km Phase II extension of the Expo Line from Culver City to Santa Monica, both of which are under construction and due for completion by summer 2016. The additional 97 cars will be introduced on the 13.5km Crenshaw/LAX Transit Line, also under construction, and the Blue Line which is being modernised.

The LRVs and the construction of the Gold and Expo light rail extensions are being mainly funded by Los Angeles County Measure R, a half-cent sales tax passed by voters in 2008, with the balance coming from state and federal sources.

LACMTA is also constructing a 3km connection between two lines in the centre of Los Angeles and plans to start construction soon of an extension to the Purple Line metro to Westwood.