ALSTOM has unveiled the first of 23 Citadis X05 LRVs which will run on the three lines in Caen, France. The LRVs were ordered in November 2016 with the first deliveries due in October 2018 and entry into commercial service scheduled for September 2019. 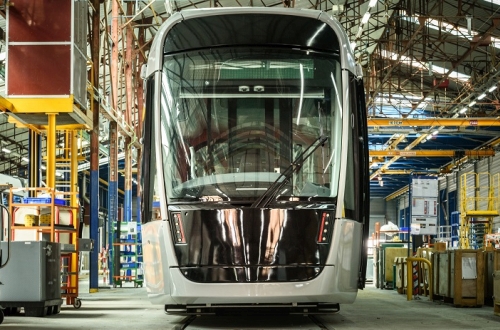 The Citadis X05 LRV for Caen is 33m long and equipped with six double doors on each side, enabling it to transport more than 210 passengers. It features 100% LED lighting, USB charging points, six extra-large passenger information screens and large windows covering 45% of the vehicle. Alstom says the LRV is energy-efficient and will also be able to climb slopes with gradients of more than 8%.

The LRVs will replace a fleet of rubber-tyred guided vehicles which were withdrawn from service at the end of 2017 to allow the network to be converted into a conventional light rail system.

A design committee made up of elected representatives of Caen worked with Alstom to create three different trams, with residents voting in 2016 for their favourite design via a dedicated website.