ALSTOM has completed manufacturing of the first Citadis LRV for the Ecuadorian city of Cuenca at its plant in La Rochelle. The vehicle is currently in transit and is expected to arrive in Ecuador's third largest city by the end of June. 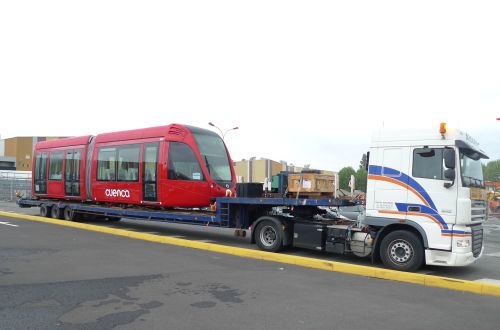 The city of Cuenca selected the Cita Cuenca consortium, which consists of CIM, Ineo, TSO and Alstom, to supply an integrated light rail system in a $US 142.6m contract in June 2013, with Alstom's share worth $US 91m.

The network currently under construction spans 10km and includes 27 stations. It will utilise Alstom's APS ground power supply on a 4km section through the city centre and is the first city in the Americas to deploy the technology. Alstom is also providing electrification, power supply and systems integration.

The 33m-long low-floor Citadis LRVs have capacity for around 300 passengers. The 13 remaining vehicles are currently being manufactured in La Rochelle and are expected to be completed by October with the start of commercial services scheduled for 2016.

Spanish consortium Tranvía Cuatro Ríos de Cuenca is building the rolling stock depot and also carried out work to prepare the alignment under a $US 72.1m contract.

The project has a total budget of $US 232m and will be managed by SMT-AC/Artelia Ville & Transport, France, after it secured an $US 8.2m contract in April 2013. The Ecuadorian Ministry of Finance is providing $US 147m towards this cost with the remainder coming from the Municipality of Cuenca, which secured a loan from the French government's Emerging Country Reserve loan scheme.