A ceremony was held in the Estonian capital Tallinn on August 30 to mark the operation of the first tram on a new link from the future Rail Baltica station at Ülemiste to Tallinn Lennart Meri Airport. 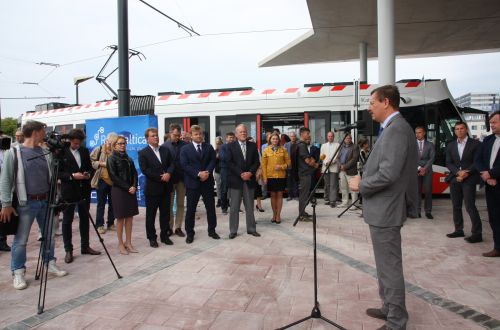 The extension to the city’s 39km tram network will become fully operational on September 1 although minor works such as landscaping still need to be completed. Trams will operate at 6-minute intervals during peak periods.

Construction of the 1.5 track-km extension, which includes a 150m tunnel under the railway and a four-lane road, started in August 2016. The project has cost €11.5m, of which 85% was funded through the European Union’s Connecting Europe Facility (CEF) as part of the Rail Baltica project. The City of Tallinn funded the remaining 15%.

“The new tram line, which now connects the airport, Rail Baltica’s future main passenger terminal in Ülemiste and the centre of Tallinn, is the first tangible result of Rail Baltica, the century’s infrastructure project, in Estonia,” says Mr Kristjan Kaunissaare, coordinator of the Rail Baltica project in Estonia’s Ministry of Economic Affairs and Communications.

RB Rail, which is responsible for the Rail Baltica project to build an 870km standard-gauge 240km/h mixed-traffic railway linking the Baltic state capitals with Poland and the broader European railway network, has invited bids to conduct a feasibility and technical framework study for a light rail connection from the Old City Harbour/Vanasadam in Tallinn to Ülemiste.