APPENZELL Railways (AB), Switzerland, began operating the first of 11 Tango LRVs in passenger service on the Teufen - Appenzell line on August 15, four months after the vehicle was for the start of testing. 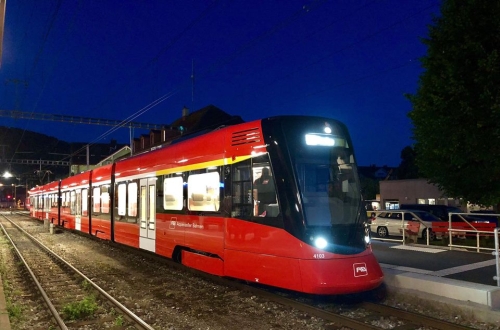 The SFr 84m ($US 84.5m) contract with Stadler compromises an initial seven LRVs ordered in 2014 and an additional four vehicles ordered in 2017, for operation on the Trogen - St Gallen - Appenzell Line. AB also ordered five Stadler EMUs in 2016 to operate on the Gossau - Appenzell - Wasserauen line in a contract worth SFr 40m. AB will sell the five Trogenerbahn vehicles it previously used to TransN in Neuchatel.

“Now we dance the tango too,” the company posted on Facebook on August 16. “Since yesterday we have been using the first "Tango" in regular passenger service on the Teufen - Appenzell line. By March 2019, the 10 other vehicles will follow on the new line Trogen - St Gallen - Appenzell.”

The LRVs are designed to be accessible for people with mobility difficulties, are equipped with 18 passenger information screens, and can also accommodate bicycles. They are also fitted with three independent braking systems to guarantee rapid braking and short braking distances.

The interior of the EMUs is designed in a traditional Appenzeller decor, with 14 passenger information screens, air-conditioning and a handicapped-accessible toilet.