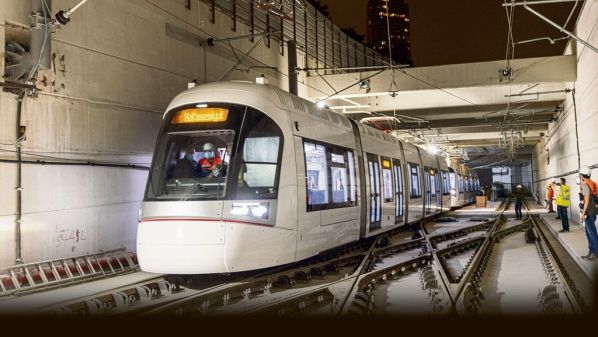 The test on October 21 ran along the full 24km line from the eastern terminus at Petakh Tikva to the southwestern end at Bat-Yam. The line, which includes a 12km underground section, runs through Petakh Tikva, Bnei Brak, Ramat Gan, Tel Aviv Jaffa, and Bat Yam.

Testing of the safety, signalling, communication, and electricity systems is due to take place before the line is opened, with all test runs to be performed at low speed and escorted by a special police unit created to allow the public to become accustomed to the train’s movement on the city streets.

Construction of the line began in August 2015, with civil works carried out by a 51:49 joint venture between China Railway Tunnel Group and Solel Boneh Infrastructure, Israel, under a Shekels 3.1bn ($US 820m) design-build contract awarded by NTA. The line was originally due to open in October 2021.

CRRC was selected in November 2015 for a contract to supply 90 LRVs for the line with an option for 30 additional vehicles. CRRC will also maintain the fleet under a 16-year contract signed in September 2017.