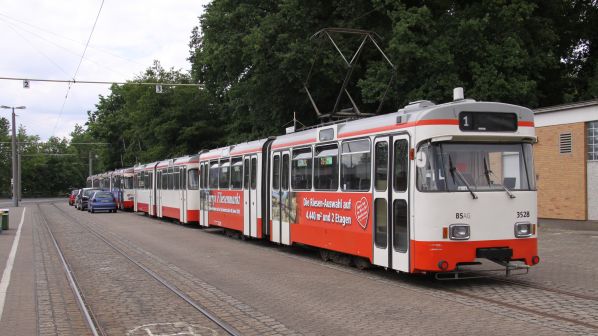 Bremen’s Line 1 will be extended from the existing terminus at Huchting Roland-Center.
Photo Credit: Keith Fender

Essen’s construction and transport committee has approved a project to develop a 5km at-grade light rail line from Bergmühle to Stadtmitte depot, which will run via the city centre and Essen Main Station. Eight stops have been approved, with another two being reviewed.

The city aims to achieve 25% of all journeys by public transport by 2035. Planning and approval for the line is due to be completed in December 2022, with construction beginning in 2023. The line is expected to enter operation with the timetable change in May 2025.

The line is expected to cost around €89m.

The Berlin senate has approved Berlin Transport Authority’s (BVG) plans for a new 4.1km extension for Line M2 from Am Wasserturm in Pankow-Heinersdorf to Blankenburg S-Bahn station in the northeast of the city.

The line is designed to serve the Blankenburg South area - one of the largest redevelopments in Berlin - where around 6000 new homes are planned. The extension will have eight stops, with a turning loop at Blankenburg station.

The new line is expected to cost around €60m. Construction could potentially begin in 2024 if planning work is completed as scheduled, and take less than two years to complete.

Final planning approval will require the agreement of multiple allotment associations as the route will run through one of the largest allotment sites in Berlin.

The Bremen city government has approved financing for a light rail extension in the city’s southwest. The development of a new line and the conversion of an existing rail line to light rail have been delayed by nearly a decade due to planning objections.

The extension of Line 1 from the current terminus at Huchting Roland-Center to a new terminus in Mittelshuchting will now proceed at a cost of around €88m, with the route entirely within the Bremen state boundary.

The new 3.6km line will use a mixture of on-street alignment plus around 1km of the disused Bremen-Thedinghauser Railway-owned (BTE) line from Kirchhuchting to Leeste and Weyhe. The project includes six new stops, including one on the short BTE section, serving around 16,000 residents. Services should begin in 2024.

Planning approval has also been obtained for the extension of Line 8, which will use the converted BTE section as well as a 12km line along a rebuilt BTE right-of-way. Approval for the line, which will serve Stuhr and Weyhe in Lower Saxony, has been obtained after long running legal disputes in both states. These were resolved in late 2019 after the Federal Administrative Court ruled in favour of the planning process.

A detailed timetable for construction of the Line 8 extension has yet to be announced.