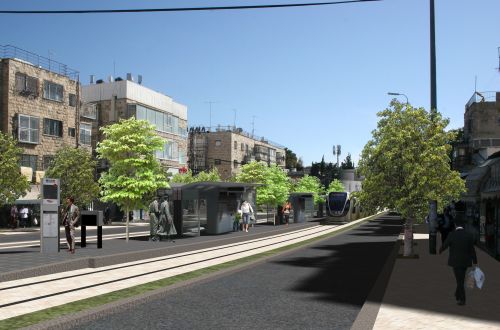 The new line will run from Gilo in the southwest of the city via Binyanei-Hauma, the location of the terminus of the new A1 railway to Tel Aviv where it will also intersect with the existing Red Line, and then east to Ammunition Hill and Mount Scopus. The line will have 36 stations and is expected to serve 200,000 passengers per day when it opens in 2024-25.

Jerusalem Transport Masterplan managing director Mr Nadaz Meroz says that JTMT, which is responsible for public transport planning in the Jerusalem metropolitan area, is already including the council's request in its work plans, and that an international tender for construction of the Green Line and the 23km Blue Line, will be published "soon" as work on the project is accelerated. Meroz told IRJ earlier this year that a tender for construction of the Green Line was expected in the first quarter of 2017, followed by a tender for the Blue Line in 2018.

This project will add a further 42 stations to the network and is currently in the process of securing approval. The line will run from Ramot in northwest of Jerusalem via the city centre to Talpiot and Gilo with branches to Malkha and Mount Scopus. The line is expected to serve 250,000 passengers per day, and the first phase is also expected to open in 2024-25.

The new lines are in addition to the extension projects currently underway for the existing Red Line; a 3.2km extension from its current southwest terminus at Mount Herzl to Hedassah Ein Kerem Medical Centre, and by 2.1km from its northern terminus at Heil Ha-Avir to Neve Ya'akov. These extensions are expected to enter service in 2021-22.

"I'm happy to see that Jerusalem will pass from one successful light rail line to a network of three lines," says transport minister Mr Israel Katz. "Light rail has changed the city's transport significantly and we are just at the beginning. Jerusalem deserves a light rail system like they have in Europe."

For more on Jerusalem's light rail expansion plans see the May 2016 issue of IRJ p24, or click here.