The contract was signed as the project costs increased to $A 1.2bn. 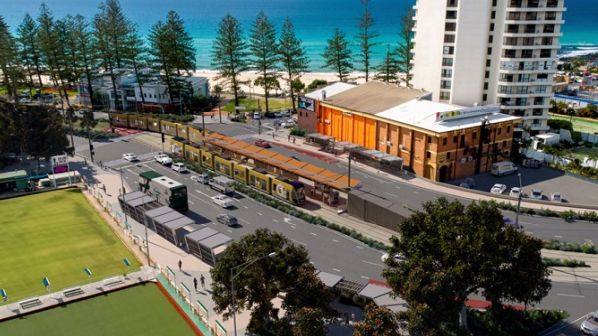 An artist's impression of Burleig station.

JOHN Holland has signed a contract to carry out major works on stage 3 of the Gold Coast light rail project, which will extend the line by 6.7km from Broadbeach to Burleigh Heads with eight new stations.

However, the total cost for the project has increased by $A 500m ($US 381.72m) to $A 1.2bn. “We expected it to be about a billion dollars a year ago and the business case was $A 709m,” says Queensland transport and main roads minister, Mr Mark Bailey. ABC reports that the cost increase is understood to be due to the introduction of Best Practice Industry Conditions (BPIC) into the Queensland government’s Procurement Policy (QPP).

Stage 3 will run along the centre of the Gold Coast Highway, with two lanes retained on either side of the light rail line.

John Holland was named as the preferred contractor in 2020, and early works along the highway have been under way since last year, but the contract for the major works wasn’t finalised until late March.

Major works are due to start this month with the line expected to open by 2025.