NORTH Hessen Transport Authority (NVV) has announced plans to upgrade the RegioTram tram-train network in and around the city of Kassel. 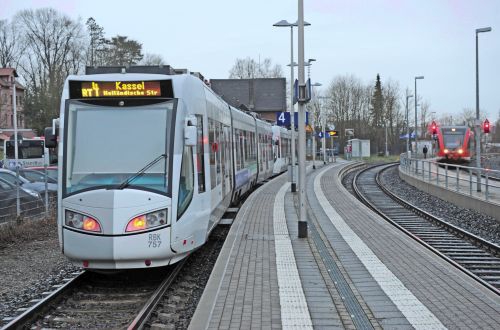 Under a letter of intent signed by Hessen state transport minister Mr Tarek Al-Wazir and NVV managing director Mr Wolfgang Rausch, the state will support the upgrading of RegioTram Line RT4 from Kassel to Wolfhagen.

Under the agreement, a detailed plan and timeline will be developed for the modernisation of the line, including the conversion of 10 electro-diesel Alstom RegioCitadis tram-trains to pure electric operation.

A precondition for the conversion has already been met with the completion of a feasibility study into the electrification of the Obervellmar - Wolfhagen section, which concluded electrification would be viable within the set timescale.

NVV has expressed a strong interest in extending RegioTram services from Wolfshagen to Korbach using battery vehicles, which would reduce greenhouse gas emissions by an estimated 1.9 million tonnes a year.

The mid-life modernisation of the fleet of 28 RegioCitadis tram-trains will include the installation of a new passenger information system, passenger Wi-Fi, at-seat power sockets, new lighting and a new interior design concept with new seats and spaces for passengers with reduced mobility.