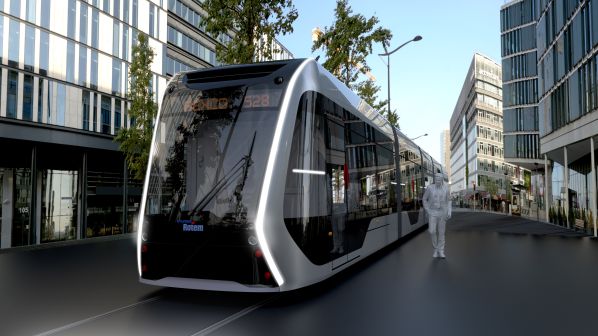 An artists's impression of the future Hyundai Rotem hydrogen LRV.

SOUTH Korea plans to invest Won 42.4bn ($US 35.8m) throughout 2023 to develop core technologies for the introduction of hydrogen-powered LRVs.

The money will be used to investigate ways in which hydrogen fuel cells used by Hyundai Motor Company’s Nexo cars can be modified for use on LRVs, the Ministry of Trade, Industry and Energy says.

The global market for hydrogen-powered trains is expected to reach Won 18 trillion in 2050, rising from Won 700bn in 2025 the ministry claims.

The ministry also plans to develop hydrogen fuel cells with a capacity of 380kW. This performance is equal to around four Nexo cars.

Plans are in place for the construction of a hydrogen charging station for LRVs next year, as well as a planned launch of a test run in Ulsan.

Mass production of hydrogen LRVs is expected to begin in 2024, with Korea aiming to export the vehicles across southeast Asia and to Europe.