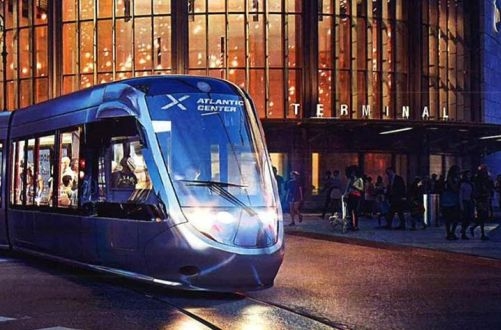 The city is proposing the construction of a 25.7km line along the East River connecting growing neighbourhoods in Brooklyn and Queens, some of which currently have limited mass transit options.

The $US 2.5bn project, called the Brooklyn Queens Connector (BQX), will run from Sunset Park to Astoria, serving neighbourhoods including Long Island City, Greenpoint, Dumbo and Red Hook, and will be funded through increases in property tax revenues from developments along the route. Construction is expected to begin in 2019 and be completed by 2024.

De Blasio officially announced the project during his State of the City address on February 4 where he said the "state-of-the-art streetcar... has the potential to generate over $US 25bn of economic impact for our city over 30 years."

"The BQX has the potential to change the lives of hundreds of thousands of New Yorkers," the mayor said.

The last sections of New York's once extensive tram network were removed in the 1950s to accommodate private cars. The new route is proposed to run 70% on its own right-of-way and 30% in mixed traffic.