A new fleet of low-floor LRVs for Krasnodar will be assembled in the Russian city under a letter of intent signed on April 14 by the city's mayor Mr Vladimir Evlanova, CEO of public transport operator KTTU Mr Alexei Knyazev, and the president of PC Transport Systems Mr Feliks Vinokur. 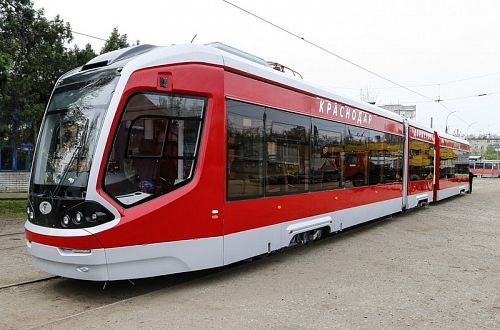 Under the agreement, 1524mm-gauge type 71-931 Vityaz vehicles will be assembled at KTTU's own workshops, which currently carries out overhauls on the operator's fleet of trams and trolleybuses.

Around Roubles 16m ($US 242,000) will be invested in a production line at the workshop and in the first phase of the project, 10% of assembly will be carried out locally increasing to 25%.

The first locally-assembled vehicle is due to be rolled out by the end of the year and KTTU says it hopes to have capacity to assemble 12-24 three-section vehicles per year within two years of starting production. Trams for other Russian cities could also be assembled in Krasnodar in the longer-term.

The signing of the agreement coincided with the start of trial operation with a pre-series Vityaz LRV on Line 5 on April 14. The 75km/h three-section LRV, which is similar to vehicles already in service in St Petersburg, accommodates up to 320 passengers.