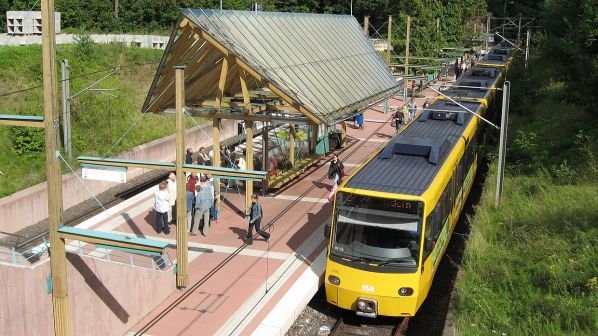 THE local council in Ludwigsburg, a city north of Stuttgart in the German state of Baden-Württemberg, has approved plans first presented in 2020 to build a light rail system. This replaces a project to build an 11km Bus Rapid Transit system.

The light rail line through the city, which has around 95,000 residents, will be up to 28km long, and would run for 8km along the alignment of a former railway between Ludwigsburg and Markgröningen. The line was closed to passenger services in 1975, and last carried freight in 2002.

While there had been local political opposition to the planned use of city centre streets for the light rail line, this was supported by the majority of local councillors. The new system will use low-floor LRVs, unlike the neighbouring Stuttgart U-Bahn system which uses high floor platforms and vehicles, and will be built in stages from 2026 onwards with the first sections due to open in 2028. The final section to the former US Army military housing redevelopment area of Pattonville is expected to be completed in 2032.

Detailed planning for the new network will now be undertaken to obtain planning permission for construction. The project has been previously estimated as costing at least €250m.

The council in Ludwigsburg together with the neighbouring communities of Remseck, Möglingen, and Markgröningen and the Pattonville district created a special-purpose organisation to design and build the new system in 2020.