THE Ukrainian city of Lviv has awarded a contract for the supply of 10 new low-floor LRVs as part of the city’s public transport modernisation programme. 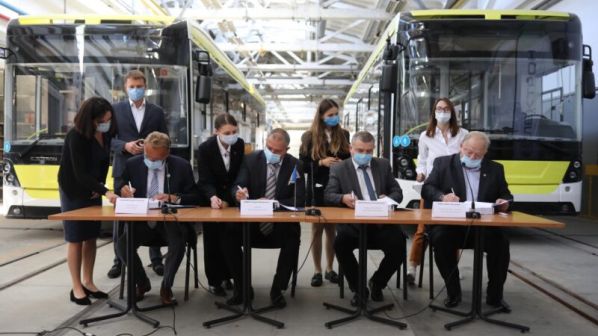 The five-car 30.2m-long LRVs will be manufactured and supplied by Electrontrans, a Ukrainian-German consortium of local firm Electron Concern and TransTec Vetschau, Germany, and are planned for delivery by 2025.

Purchase of the new fleet will be funded primarily through a €12m loan from the European Investment Bank (EIB), with a further €8.8m of funding from Lviv city council. EIB funds for the project were originally allocated for the purchase of three-car, 20m-long vehicles in 2016, but were subsequently reallocated following the publication of a reassessed transport strategy for the city.

The loan is part of a €200m European Union (EU) funded ‘EIB Urban Transport for Ukraine’ scheme, which finances public transport improvements in 11 cities across the country to bring them in line with current EU standards.

The purchase is part of an ongoing programme of improvements to Lviv’s public transport network, which also includes upgrades to the city’s existing fleet of 50 Tatra KT4-SU LRVs.

Lviv is also currently receiving deliveries of an order of 50 trolleybuses purchased from Electron in 2019. Delivery of the first batch of 10 was received in November of last year.

“Light rail is one of the most environmentally friendly and energy efficient modes of public transport,” says Ms Natalia Forsyuk, deputy minister of infrastructure for Ukraine. “Sustainable and ecological transport is one of the priorities of the European Green Agreement, and Ukraine strives to be as close as possible to European standards in this matter.”

“As representatives of the climate-oriented bank of the EU, we are convinced that a well-functioning light rail network makes a significant contribution to reducing car traffic and pollution, and to curb climate change,” says Mr Jean-Eric de Zagon, head of the EIB in Ukraine.

For detailed data about fleet orders from around the world, subscribe to IRJ Pro.