The extension is one of several planned by public transport authority Systral. 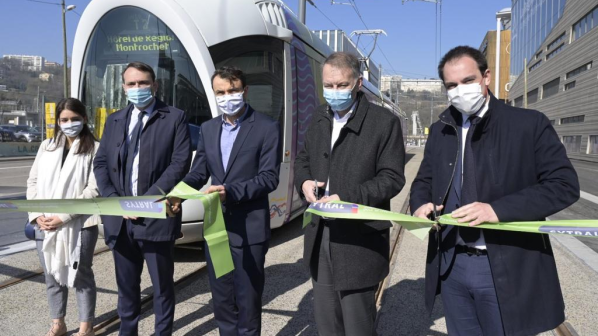 Line T2 will now be able to use T1 infrastructure from its previous terminus at Perrache to serve three stations at Place des Archives, Sainte-Blandine and Hôtel de Région-Montrochet.

It follows the completion of construction works worth €11.8m, consisting of the redevelopment of Hôtel de Région-Montrochet station, including the creation of a new T2 terminus and a turnback facility for T2 LRVs south of the station.

“This new service supports urban development projects in the Confluence district and significantly improves public transport service in this sector,” says Bernard. “With a frequency of up to two minutes during peak hours between Perrache and Confluence, the extension of T2 also offers an additional capacity of 50% on this section.”

Line T2 previously linked Saint-Priest Bel-Air in the southeast with Perrache and recorded more than 100,000 trips per day in 2019. The new T2 extension follows the opening of a new 5.7km four-stop extension to Line T7 between Vaulx-en-Velin La Soie and OL Vallée on February 1.

A further three lines and an extension are to be built in the next five years:

Systral expects to require 40 more 43m-long LRVs for these new lines, in addition to its current fleet of 101 Alstom Citadis LRVs, plus increased capacity on Lines T2, T3 and T4 and an additional depot.