THE LATEST phase of Manchester's expanding Metrolink light rail network opened on June 13 with the start of public services on the line from Victoria to a temporary station at Oldham Mumps. 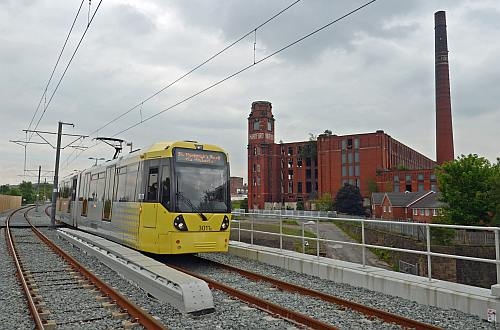 Services are initially operating at 12-minute intervals but will be stepped up to six minutes as ridership increases. The eight-station line is the first phase of a 22.5km extension to Rochdale Town Centre.

The extension leaves the Metrolink Bury line just outside the city centre and runs along the alignment of an abandoned heavy rail line to Central Park in the east of the city. Here it joins the former Oldham loop line to Oldham and Rochdale, which closed in October 2009 for conversion to light rail. Services will be extended to Rochdale Railway Station in December.

Construction is underway on a new line through Oldham town centre with stations at Westwood, King Street, Union Street, and Oldham Mumps. Upon completion in 2014, the temporary station on the former heavy rail line will close, with all services diverted through the town centre. An extension from Rochdale Railway Station to Rochdale Town Centre will also be commissioned in 2014.