SERVICES are being launched today on a tram-train line in northwestern France linking Nantes with Châteaubriant. Passengers will be able to try the new service free of charge until March 2. 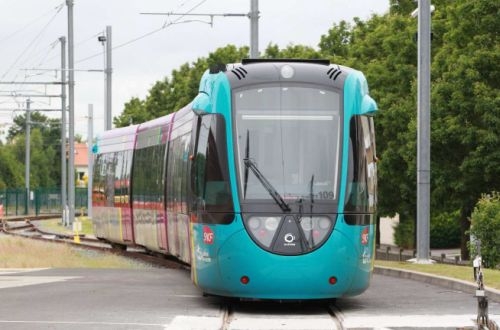 The project has involved reopening a 64km single-track line between Nantes and Châteaubriant which closed in 1980. The line has been renovated and electrified at 25kV ac. Infrastructure works cost €198.3m with 17.8% funded by the national government, 10.6% by the European Union, 2.5% by French National Railways (SNCF) and the rest by regional and local authorities.

A fleet of 24 Citadis Dualis tram-trains has been procured at a cost of €95.9m from Alstom. The vehicles are dual-voltage to enable operation over the existing urban light rail network which is electrified at 750V dc. The tram-trains can operate at up to 70km/h on the urban network and at a maximum speed of 100km/h on the line to Châteaubriant.

Only 12 of the tram-trains are required for the new service, as eight are needed for the existing Nantes – Clisson tram-train line which will be extended to a new terminus at the end of the year, while the remaining six vehicles will cover for maintenance and act as a reserve for the two lines.

The new line will be operated by SNCF, while the existing network in Nantes is run by Semitan. The Châteaubriant line is equipped with conventional railway signalling, with the tram-trains switching to driving on sight when they reach the urban network. New operating and safety rules were formulated specifically for the Châteaubriant line.

The new line is expected to carry 11,000 passengers per day.