Over-speeding cited as cause of fatal Croydon accident

BRITAIN’s Rail Accident Investigation Branch (Raib) has published an interim report into a fatal accident at 06.07 on November 9 involving an LRV which derailed and overturned on the approach to Sandilands Junction on the Croydon Tramlink network south of London. 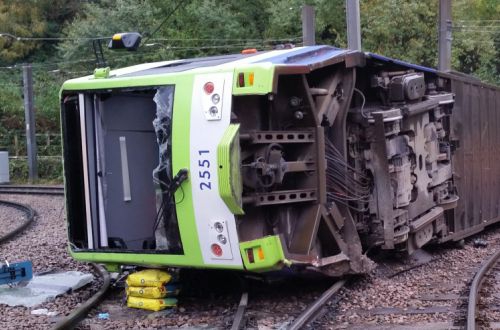 The LRV was travelling at a speed of approximately 70km/h as it entered the curve, which had a maximum permitted speed of 20km/h. Seven people died in the accident and 51 were taken to hospital, eight of them suffering from serious injuries. The right side of the tram was severely damaged, and there was some damage to the track and lineside equipment.

“At this stage, no evidence has been found of any track defects, or obstructions on the track, that could have contributed to the derailment,” says Raib. Its initial investigation did not discover any malfunction of the tram’s braking system.

“A tram approaching Sandilands Junction from Lloyd Park at 80km/h would need to brake at its full service rate of 1.3m/s2 approximately 180m before the speed restriction board in order to be travelling at 20km/h when the board was reached,” says Raib. “Initial analysis of the tram’s OTDR indicates that some braking was applied in the 180m before the 20km/h speed restriction board, but this was only sufficient to reduce the tram’s speed from 80km/h to approximately 70km/h by the time the tram passed the board and entered the curve where the accident occurred.

“The factors that led to the over-speeding are still under investigation,” says Raib. “Until these factors are better understood, and before the junction re-opens to passenger operation, Raib advises London Trams and Tram Operations to jointly take measures to reduce the risk of trams approaching Sandilands Junction from the direction of New Addington at an excessive speed. Options for consideration should include the imposition of a further speed restriction before the start of the existing 20km/h speed restriction around the curve and/or additional operational signs.”

Raib’s continuing investigation will consider:
• the sequence of events before and during the accident
• events following the accident, including the emergency response and how passengers evacuated from the tram
• the way in which the tram was being driven and any influencing factors
• the design, configuration and condition of the infrastructure on this section of the route, including signage
• the tram’s behaviour during the derailment and how people sustained their injuries
• any previous over-speeding incidents at Sandilands Junction, and
• any relevant underlying management factors.

“Our engineers have now repaired all track and other equipment and have run trams over the repaired section,” says Mr Mike Brown, London’s Transport Commissioner

“We will follow the RAIB’s advice and, before service is resumed, will implement additional temporary speed restrictions and associated signage near Sandilands to supplement existing safety arrangements.

“We are continuing to carry out a thorough safety assessment and are taking the advice of an independent panel of tram experts. We will only resume services for the local community once that rigorous assurance process has been completed.”