Keolis is operating the service with Alstom LRVS. 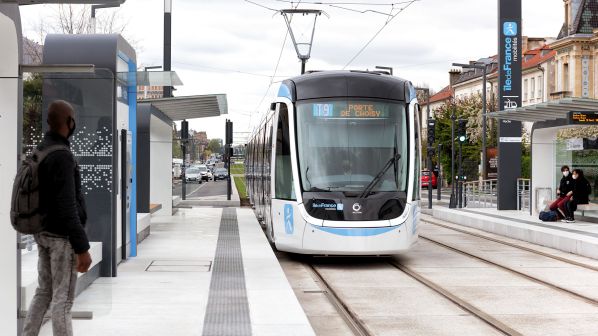 PARIS celebrated the opening of the new T9 light rail line between Paris and the city of Orly on April 10. Keolis is operating the line under a contract awarded by regional public transport authority, Ile-de-France Mobility (IDFM) in July 2019 following a competitive tender.

Services are provided with 22 45m-long Alstom Lumière Citadis X05 LRVs, which have capacity for 314 passengers, operating at five-minute headways during peak periods.

The LRVs have eight double doors per side and wider gangways to improve the flow of passengers and reduce boarding times.

Services began following a three-month trial phase, and operate from 05.30 to 00.30 on weekdays, and to 01.30 on weekends. The line connects the cities of Ivry-sur-Seine, Vitry-sur-Seine, Choisy-le-Roi, Thiais, and Orly with a total journey time of 30 minutes.

The new line is fully integrated with the existing transport network thanks to interconnections with the metro, including the upcoming Grand Paris Express metro Line 15, other light rail and suburban lines. The T9 tram is also connected to 15 bus routes and five bus lines in the Seine Grand Orly basin operated by Keolis following an award by IDFM at the same time as the T9 in July 2019.

While developing T9, IDFM set out to encourage bike use by installing a continuous 20km cycle path between Paris and Orly, as well as bike racks at each station and every 150m along the line.

Keolis recruited 100 employees to fill operating and maintenance positions, 89% of who live in the region.