PORTLAND, Oregon, added a fifth line to its light rail network on September 12 with the start of public services on the Max Orange Line from Portland State University (PSU) to SE Park Avenue in Milwaukie. 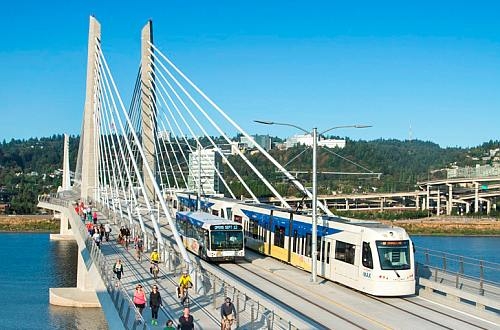 The 11.7km line is effectively an extension of the Yellow Line serving two stations on the west side of the Williamette River and eight on the east side and linking Portland city centre with the south Waterfront, Milwaukie, and northern Clackamas County. The line crosses the river on the Tilikum Crossing, which at 520m is one of the longest transit-only bridges in the United States. The Orange Line shares the bridge with the Portland Streetcar, buses, bicycles, and pedestrians.

Services are operated by a fleet of 18 Siemens S70 LRVs which are equipped with Sitras SES onboard energy storage systems. Ten bus lines have been revised to feed into the Orange Line and there are 446 new bicycle parking and 719 car parking spaces, including nine with electric vehicle charging points.

The total budget for the project was $US 1.49bn, although Portland transit authority TriMet says it has achieved savings of $US 48m during construction. Around $US 65m was invested in new or improved pedestrian and bicycle infrastructure as part of the project.

Average weekday ridership is forecast to reach 22,765 by 2030, when approximately 22,000 households and 85,000 jobs will be located within walking distance of the line's stations.

The completion of the Orange Line expands the Max light rail network to nearly 100km and 97 stations.