THE city that launched the US light rail revolution in 1981 will extend its Green Line on September 2 from the Old Town Transit Center to the 12th and Imperial Transit Center. 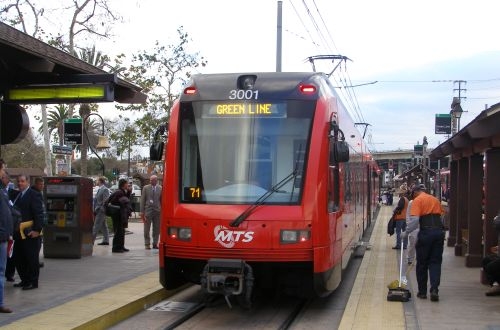 The project is a major milestone in the $US 720m renewal of San Diego's light rail network, known locally as the Trolley, being undertaken by the San Diego Association of Governments and Metropolitan Transit System (MTS).

"With the Green Line coming downtown, people all over San Diego can now reach the downtown area more conveniently," says Mr Harry Mathis MTA chairman. "This event also marks about the half-way point in a major reinvestment of our trolley infrastructure, which will bring low-floor cars and modern stations to our entire network."

MTS already has 11 Siemens low-floor LRVs and the number will grow to 76. The new vehicles will be introduced on the Orange Line in spring 2013 and the Blue Line in summer 2014. The renewal of the 75km network started in 2010 and is due to be completed in 2015.

MTS will also alter the operating pattern of its services on September 2 in an effort to eliminate some transfers for passengers and cut journey times by up to 12 minutes.